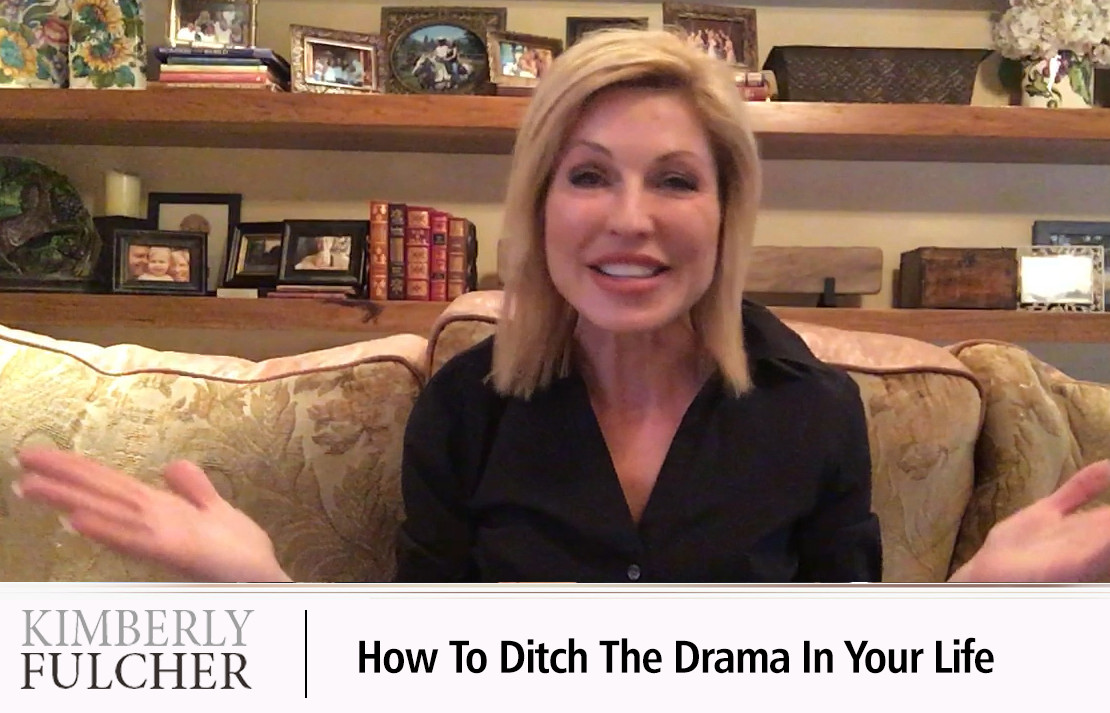 How To Ditch The Drama In Your Life

If your life isn’t working the way you want it to, there’s a pretty good bet you’re part of the problem. I know that sounds harsh, but I’m here to give it to you straight. So let’s talk straight.

If you’re doing drama, you’re creating problems in your life that don’t need to be there. Drama drains your life force. At its essence, drama is a distraction. It asks you to focus on things that don’t matter, creates emotional turmoil, and feeds off of your energy like a parasite. (Gross, right?)

Drama is a self-inflicted wound. It’s also an addictive cycle that keeps you depleted, stuck, and spinning around in a dark little vortex, feeling sorry for yourself, making people uncomfortable, and destroying your dreams.

I want you to stop it. (For real. Knock it off. You’re better than that.)

I wish I could tell you I know so much about drama because I’m a life coach. (And that does help.) But the truth of the matter is a little more uncomfortable than that. I know drama because I used do drama. (On like an epic scale.)

Because I’ve lived the drama cycle, I know that it does much more than just keep you stuck. Drama HURTS. When you’re in it, you feel anxious, unhinged, angry, and upset. You obsess. You stew. You play out little scenes in your mind where you really let so-and-so have it. (I used to run movies in my head.) At times it can even feel like you’re coming out of your own skin.

You don’t have to feel this way anymore.

Empowered women don’t do drama. You’re on the path to becoming an empowered woman, so let’s ditch that drama of yours, okay? In this week’s episode of GrooveTV I’m gonna show you how in 3 simple steps. Press PLAY already, and leave your drama in the dust. (Seriously, can you hear Mary J?)

Before you can change it, you have to get clear about what’s going on with you. Drama shows up in your life in many ways. Here are the five I’ve helped my clients deal with most frequently.

Chaos: You’re not handling your business, so you deal with a ton of urgent, time-sensitive requirements. (Because sooner or later that business of yours always shows up to be handled.) If you always seem to be up against an urgent deadline, there’s a pretty good chance you’re in drama of your own making.

Poor boundaries: You’ve allowed yourself to become the person everyone comes to with their problems. (So you’re always dealing with a problem.) Or you say yes when you mean no. (So you’re always doing something you don’t want to do.) If you’re playing the part of Susie-yes-girl, you’re inviting drama.

Lack of direction: You haven’t established a vision for your life, or a set of goals. You aren’t working toward anything, so you’re easily distracted (by everything). If you’re bouncing around swiping at bright shiny balls like a kitten, you’re doing drama. (Minus the kitten cuteness.)

Resentment: You’re holding your tongue, not speaking up for yourself, and nursing petty little grudges like you’re tending a garden. Everything looks calm on the surface, but inside you’re a seething ball of hot molten anger (kinda like a volcano). When you blow it won’t be pretty. (And WOMAN will there be drama.)

Need for attention: This one hurts. (It was my drama specialty.) Somewhere along the way, you learned that having problems gets you attention, and you like attention. So you turn little things into big things, which ensures you always have a problem. (And the attention that goes with having one.)

I’m willing to bet you found yourself in at least one of these categories. It’s possible you even related to all of them. (When I started doing this work, I had stuff to cover in every bucket.)

The buckets themselves are emotionally heavy. We’re not going to solve them today. For now, I just want you to get clear about how drama is showing up in your life, and what part you’re playing in creating it. That starts with you naming your drama. Once you have, we jump right into our second step.

There is a pattern to the way drama plays out in your life. When you become aware of it, you give yourself the power to short-circuit the cycle. There are two parts to a drama pattern. There’s a bait, and there’s a bite.

You likely receive many invitations to drama throughout the day. (Because life includes no shortage of irritants, problems, and difficult people.) The invitation is the bait, but it’s a pretty good bet you don’t bite on every invitation you receive.

I want you to start noticing which invitations you can easily ignore, and which ones find you biting down like a pit bull. (Love to pit bulls.) Once you get clear about what it is that causes you to bite, you reclaim your power, which allows you to change.

You have a choice about what you bite on. You don’t have to accept every invitation to drama that comes your way. I like to think about drama invites like incoming phone calls. Just because your phone rings, that doesn’t mean you have to answer it, right? Start screening your drama invites like you screen your calls.

Okay, home stretch. This last step is a little bit harder, but you can handle it.

The drama in your life has a common denominator. We want to identify what that is, and then adjust your approach so that you move away from drama (instead of smack dab into it.)

There are three common denominators for us to take a look at.

We’ll start with you. Every aspect of your life (the good and the beautiful as well as the bad and the ugly) has one common denominator. YOU. You are in charge of you. You determine how you respond to difficult people and circumstances. You decide which bait to bite on.

This is difficult, because it asks you to own your stuff, which is never fun to do. (It’s so much easier to blame other people, isn’t it?) But you can’t change other people. You can only change yourself.

You have to decide you’re going to be better than drama. Do not use your energy for things that are not worthy of you. (For the record, the only things worthy of you are those things that help you carry your life forward or do good in the world.) You must unplug from anything that doesn’t fit this bill. YOU CAN.

And what if you have maddening people around you, (who give you plenty of reasons to be in drama thank-you-very-much)? If drama consistently comes into your life through certain people, you need to rethink hanging out with these people.

The same holds true for places. If you can consistently predict that going to a specific place is going to include drama (whether that’s an office, a family member’s home, or some type of organization) you need to reconsider going to that place.

Drama is NOT a normal state of being. You don’t have to live with it. But you have to decide you’re not going to (or you’ll probably have a lot of it). Your time, attention, and energy are precious commodities. Protect them my sister. No more drama in your life. ☺

That’s it for the week. Remember that I never want you to blindly take my word for anything. Only you know what’s right for you. I just happen to have a few coaching tools that can help you get closer to that wisdom. Give this lesson’s advice a test drive in your life, and let me know how it goes. There are three ways for us to interact.

My mission is your empowerment. That’s why I’m here. If you haven’t already joined my community, please do it by entering your email (www.kimberlyfulcher.com). Until we meet again, know that life is happening for you.

And you got this!